Mary in the Sacred Scriptures: The Immaculate Conception of the Blessed Virgin Mary
by St. Alphonsus Liguori, Doctor of the Church and Founder of the Congregation of the Most Holy Redeemer 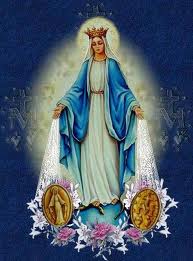 St. Augustine says that “Mary was that only one who merited to be called the Mother and Spouse of God.” For St. Anselm asserts that “the Divine Spirit, the Love Itself of the Father and the Son, came corporally into Mary, and enriching Her with graces above all creatures, reposed in Her and Her His spouse, the Queen of heaven and earth.” He says that He came into Her corporally, that is, as to the effect: for He came to form of Her immaculate body the immaculate body of Jesus Christ, as the Archangel had already predicted to Her: The Holy Ghost shall come upon thee (Lk. 1.35). And therefore it is, says St. Thomas Aquinas, “that Mary is called the temple of the Lord, and the sacred resting-place of the Holy Ghost: for by the operation of the Holy Ghost She became the Mother of the Incarnate Word.”

And now, had an excellent artist the power to make his bride such as he could represent her, what pains would he not take to render her as beautiful as possible! Who, then, can say that the Holy Ghost did otherwise with Mary, when He could make Her who was to be His spouse as beautiful as it became Him that She should be? Ah, no! He acted as it became Him to act: for this same Lord Himself declares: Tota pulchra es, Amica Mea, et macula non est in te [Thou art all fair, O my love, and there is not a spot in thee (Cant. 4.7)].

The Holy Ghost signified the same thing when He called this His spouse an enclosed garden and a sealed fountain: My sister, My spouse, is a garden enclosed, a fountain sealed up (Cant. 4.12). “Mary,” says St. Sophronius, “was this enclosed garden and sealed fountain, into which no guile could enter, against which no fraud of the enemy could prevail, and who always was holy in mind and body.” St. Bernard likewise says, addressing the Blessed Virgin, “Thou art an enclosed garden, into which the sinner’s hand has never entered to pluck its flowers.”

We know that this Divine Spouse love Mary more than all the other saints and angels put together. He loved Her from the very beginning, and exalted Her in sanctity above all others, as it is expressed by David in the Psalms: The foundations thereof are in the holy mountains: the Lord loveth the gates of Sion above all the tabernacles of Jacob… a man is born of Her, and the Highest Himself hath founded Her (Ps. 86.1, Vulg. and DRV). Words which all signify that Mary was holy from Her conception. The same thing is signified by other passages addressed to Her by the Holy Ghost. In Proverbs we read:Many daughters have gathered together riches: thou hast surpassed them all (31.29). If Mary surpassed all others in the riches of grace, She must have had original justice, as Adam and the angels had it. In the Canticle of Canticles we read, There are… young maidens without number. One is my dove, my perfect one [in Hebrew, it is my entire, my immaculate one] is but one, She is the only one of Her mother (6.7). All just souls are daughters of divine grace; but amongst these Mary was the dove without the gall of sin, the perfect one without spot in Her origin, the one conceived in grace.

Hence, it is that the Angel, before She became the Mother of God, already found Her gratia plena [full of grace, Lk. 1.28]; on which words St. Sophronius writes, that “grace is given partially to other saints, but to the Blessed Virgin all was given.” So much so, says St. Thomas Aquinas, that “grace not only rendered the soul, but even the flesh of Mary holy, so that this Blessed Virgin might be able to clothe the Eternal Word with it.” Now all this leads us to the conclusion that Mary, from the moment of Her conception, was enriched and filled with divine grace by the Holy Ghost: the plenitude of grace was in Her; for from the very moment of Her conception the whole grace of the divinity overflowed upon Her, by the outpouring of the Holy Ghost. Hence, St. Peter Damian says, “that the Holy Ghost was about to bear Her off entirely to Himself, who was chosen and pre-elected by God.” The Saint says “to bear Her off” to denote the holy velocity of the Divine Spirit in being beforehand in making this spouse His own before Lucifer should take possession of Her.

The Teresian Order of Our Lady of Mt. Carmel - the (traditional) Discalced Carmelites of Catholic Resistance who adhere to the true God Whom generations of holy Catholics throughout the ages past have known, loved, served, and worshipped only in the Tridentine Latin Mass - "the NORM [of the Roman Rite] IN PERPETUITY" (Pope St. Pius V, "Quo Primum") and upon which is built the Traditional Catholic Order constituted by God and ruled by the Sovereign Roman Pontiff "for obedience to the Faith" (Rom. 1.5). On our position, see our blogposts "Our 'Great Reversal'" and "The Ultimate Delusion of Vatican II 'Catholicism'." Home of the original online "Catholic Resistance."
View all posts by Ignis Dei →
This entry was posted in Doctrinal Instructions, Sacred Scriptures, The Blessed Virgin Mary and tagged Blessed Virgin Mary, Catholicism, Immaculate Conception, original sin, Redemption, Satan/Lucifer, St. Alphonsus Liguori, St. Bernard, St. Sophronius, St.Thomas Aquinas. Bookmark the permalink.