Feast of St. Athanasius
Greek Doctor of the Church, “The Voice of Orthodoxy”

In the fourth century, we saw Christendom ravaged by Arianism (the heresy of Arius denying the divinity of Jesus Christ). St. Jerome wrote of that period: “The whole world groaned and was amazed to find itself Arian.” And at the heart of the catastrophe was the compromised Pope (Liberius) who succumbed to pressures (1) to sign an ambiguous formula of the Catholic Faith where the “homoousion” (Jesus Christ was consubstantial with the Father: of one divine substance) was omitted and later (2) to issue also a decree of “excommunication” against St. Athanasius, then Bishop of Alexandria, who, according to Cardinal Newman, was  the  “principal instrument, after the Apostles, by which the sacred truths of Christianity have been conveyed and secured to the world.” Unjustly “excommunicated” by the Roman Pontiff and with almost the entire hierarchy infected with Arianism, St. Athanasius was forced to operate outside the ‘official communion’ with the Holy See and even ordained priestly candidates of orthodox theological formation in the dioceses of other infected-bishops to ensure that the true Catholic priesthood would survive. The faithful also who stood fast and h[e]ld (2 Thess. 2.14) the traditional teachings of the Faith, then reduced to a handful of the Scriptural remnant, had to worship outside their ‘official’ parish churches – the churches of those infected-priests in communion with their equally infected-local ordinaries [the local bishops] – and sought the truly orthodox Catholic teaching, the rest of the uninfected Sacraments, and sound spiritual guidance not from their local ‘priests’ and not from the ‘bishops’ of their diocese and their country who were in ‘official communion’ with a compromised Roman Pontiff, but from an “excommunicated” bishop (cf., 1 Machabees 2.37) and the priests he “illicitly” ordained. It might be asked, “How could the faithful listen to an ‘excommunicated’ bishop and his ‘illicitly’ ordained priests who claimed to be right while the Roman Pontiff and the body of the episcopate [ not teaching infallibly of course] were wrong?” In the first place, it is not the majority that determines what is the truth and, conversely, what is good – as is the spirit of our present age breathing in and out the Masonic principles of 1769. St. Athanasius and his priests could only claim the guarantee of the Eternal Word: His truth shall compass thee with a shield; thou shalt not be afraid of the terror of the night…. A thousand shall fall at thy side, and ten thousand at thy right hand: but it shall not come nigh thee…. Thou hast despised all them that fall off from Thy judgment; for their thought is unjust (Ps. 90.5,7; 118.118). In the second place, the faithful recognized in the mouths and in the epistles of the “excommunicated” bishop and his “illicitly” ordained priests the one true Apostolic confession of the Faith into which they had been baptized, in which they had been catechized, and which they had the obligation to uphold and defend by their reception of the Sacrament of Confirmation.

Epistle of St. Athanasius to his flock: 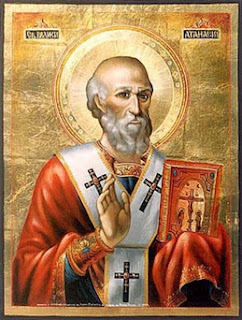 “May God console you! … What saddens you … is the fact that others have occupied the churches by violence, while during this time you are on the outside. It is a fact that they have the premises – but you have the Apostolic Faith. They can occupy our churches, but they are outside the true Faith. You remain outside the places of worship, but the Faith dwells within you. Let us consider: what is more important, the place or the Faith? The true Faith, obviously. Who has lost and who has won in the struggle – the one who keeps the premises or the one who keeps the Faith? True, the premises are good when the Apostolic Faith is preached there; they are holy if everything takes place there in a holy way …

“You are the ones who are happy; you who remain within the Church by your Faith, who hold firmly to the foundations of the Faith which has come down to you from Apostolic Tradition. And if an execrable jealousy has tried to shake it on a number of occasions, it has not succeeded. They are the ones who have broken away from it in the present crisis. No one, ever, will prevail against your Faith, beloved Brothers. And we believe that God will give us our churches back some day.

“Thus, the more violently they try to occupy the places of worship, the more they separate themselves from the Church. They claim that they represent the Church; but in reality, they are the ones who are expelling themselves from it and going astray. Even if Catholics faithful to Tradition are reduced to a handful, they are the ones who are the true Church of Jesus Christ.”

That this catastrophe repeating itself, and even with graver magnitude, we learn in the night of February 2, 1634 at the Conceptionist Convent in Quito, Ecuador. The Reverend Mother Mariana de Jesus Torres was praying with her eyes fixed on the Tabernacle. After this, the sanctuary lamp went out, leaving the main sanctuary in complete darkness. Then, suddenly, she saw a celestial light illuminate the whole church. The Queen of Heaven, in Her title “Our Lady of Good Success”, appeared, approached her, and explained to her why the sanctuary lamp – which tells the faithful that the Lord Jesus Christ is really and truly present in the tabernacle – was extinguished: “In the 19th century, and advancing into a large part of the 20th, various heresies will be propagated… As they come to dominate, the precious light of Faith will be almost extinguished…. In this epoch, the secular clergy [the diocesan priests, not members of religious Orders or Congregations] will be far removed from its ideal [cf., our post “The ‘Voice of Orthodoxy’ in the Post-Vatican II Era: ‘At the Heart of Catholic Crisis – the Priesthood'”], because the priests will be careless in their sacred duties. Lacking the divine compass [the “diabolical disorientation” according to Sr. Lucia, C.D., cf., “Our Lady and the New ‘Catholic’ Orientation of Rome in the 1960’s” and “The Ultimate Delusion of Vatican II ‘Catholicism’“], they will stray from the road traced by God for the priestly ministry [cf., “Our ‘Great Reversal’“]….” At La Salette, France (1849): “Rome will loose the Faith [cf., Pope Paul VI: “We preach ecumenism,” in “Our ‘Great Reversal;'” also “The ‘Great Tribulation,” and “Our Lady & the New Orientation in Rome in the 1960’s”] and become the seat of the Antichrist* [cf., “A Perilous ‘Catholic’ Voyage” and “The ‘Great Tribulation'”]; and, at Fatima, Portugal (1917): “In Portugal [not in Rome] the dogma of the Faith will always be preserved, etc.“**
—
* Originally part of the Secret which Our Lady said could be published in 1858. This was contained in the original edition of Lecce (1879) and again in Lecce edition of Nov. 15, 1979 with the Imprimatur of Bishop Zola.

** In the Fourth Memoir of Sr. Lucia, C.D. closing the Second Secret yet introducing the Third Secret with “etc.”
—

“Matters have come to this pass…” (St. Basil writing about the year 372 A.D. on the catastrophic state of the Church):

“Surely the pastors have done foolishly; for – excepting a very few who either on account of their insignificance were passed over, or who by reason of their virtue resisted, and who were to be left as a seed and root for the springing up again and revival of Israel [the Church. ed.] by the influence of the Spirit – all temporized, only differing from each other in this, that some succumbed earlier, and others later; some were foremost champions and leaders in the impiety, and others joined the second rank of the battle, being overcome by fear, or by interests, or by flattery, or, what was the most excusable, by their own ignorance” (St. Gregory Nazianzen, about 360 A.D.).

“Religious people keep silence, but every blaspheming tongue is let loose. Sacred things are profaned; those of the laity who are sound in the Faith avoid the places of worship as schools of impiety, and raise their hands in solitude, with groans and tears to the Lord in Heaven” (St. Basil, about the year 372 A.D.). Four years later: “… The people have left their houses of prayer, and assembled in the deserts, – a pitiable sight; women and children, old men, and men otherwise infirm, wretchedly faring in the open air, amid most profuse rains and snowstorms and winds and frosts of winter; and again in summer under a scorching sun. To this they submit, because they will have no part of the wicked Arian leaven [now, the Modernist leaven with the label “New ‘Catholic Theology’]. ” And: “Only one offense is now vigorously punished an accurate observance of our Fathers’ traditions. For this cause the pious are driven from their countries and transported into deserts [cf., 1 Machabees 1-2].”

When therefore you shall see the abomination of desolation… standing in the holy place…. where it ought not…:
then let them… flee to the mountains.
[For] wheresoever the Body shall be, thither will the eagles also be gathered together
(Mt. 24.15; Mk. 13.14; Mt. 24.28)

See: “Catholic Resistance, Not Disobedience“; also, “The Wine of the Wrath of God“

The Teresian Order of Our Lady of Mt. Carmel - the (traditional) Discalced Carmelites of Catholic Resistance who adhere to the true God Whom generations of holy Catholics throughout the ages past have known, loved, served, and worshipped only in the Tridentine Latin Mass - "the NORM [of the Roman Rite] IN PERPETUITY" (Pope St. Pius V, "Quo Primum") and upon which is built the Traditional Catholic Order constituted by God and ruled by the Sovereign Roman Pontiff "for obedience to the Faith" (Rom. 1.5). On our position, see our blogposts "Our 'Great Reversal'" and "The Ultimate Delusion of Vatican II 'Catholicism'." Home of the original online "Catholic Resistance."
View all posts by Ignis Dei →
This entry was posted in Christian Life, Sacred Scriptures, The Blessed Virgin Mary, Traditional Roman Catholic Order and tagged Antichrist, Arianism, Catholcism, Christianity, diabolical disorientation, Enlightenment, Freemasonry, heresy, Holy See, Mother Mariana, Our Lady of Fatima, Our Lady of Good Success, Our Lady of La Salette, Roman Pontiff, Sr. Lucia, St. Athanasius, St. Jerome, Third Secret, Traditional Catholic. Bookmark the permalink.