First Saturday of the Month

When St. John Mary-Vianney went around his parish in his early years of being the pastor of Ars, he observed that there were many “living dead” – in the absence of the modern lingo ‘zombies’. But the man of God (4 Kings 4.25) had put his mouth upon [their] mouth, and his eyes upon [their] eyes, and his hands upon [their] hands (v.34) – that is, he breathed upon them the sound doctrines of the Faith which was the supernatural light of his eyes he needed for the execution of his divine office – so that not only the lambs entrusted to him grew warm or warmer but even those coming from the other pastures of the Lord and Savior. Now, alas! After the revelations in La Salette and in Fatima made by the Woman at the foot of the Cross (from today’s Holy Gospel for the conventual votive Mass of the Immaculate Heart, Jn. 19.25-27) – the New Eve, the New Mother of life – of the loss of the light of Faith in Rome from the very top (sick… head, Is. 1.5), in the light of the events themselves and by the testimony on-the-record of Paul VI himself, we have reached our darker age signified by the Light of life (from the Holy Gospel for the Saturday in the Fourth Week in Lent, Jn. 8.12-20) in His Apocalyptic revelations to His Beloved Disciple, reproaching the mainstream of those who bear the name Christian [that is, Catholic]: Thou hast the name of being alive and thou art dead (Apoc. 3.1).

In last Thursday’s Lesson (4 Ki. 4.25-38), we see the staff of the man of God, Eliseus, “incapable of restoring to life mankind, then dead to sin” (Bp. R. Challoner, reviser of the original Catholic Douay-Rheims Version) – “a represent[ation],” explains Bp. Challoner, “of the rod of Moses or the Old Law.” Hence, the miracle performed by the presence of the man of God himself was intended to show us, according to many Fathers of the Church, the necessity of the Incarnation of the Eternal Word to redeem mankind Whom He created but got lost for taking up also the infernal cry of ‘liberty of thought and conscience’ [on what is good and what is evil]. 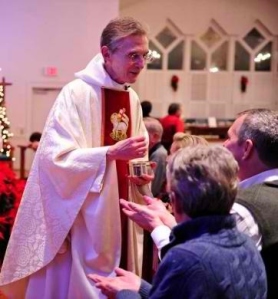 No, not your ‘Vatican II-Church’
pastor: Protestant Episcopalians
professing NO-Real-Presence
of Christ – only a symbolic wafer:
communion in the hand
(Slide show: church services 11
@ chronicle.augusta.com).

But when the Eternal Word made flesh (Jn. 1.14) restored, not by invoking the Name of God but in His own Name (a manifestation of His divinity), the dead… son back to life in today’s Gospel (Lk. 7.11-16), He spoke… Arise… and [it was] made [so] (Ps. 148.4; Lk. 7.14) yet the living did not remain long in standing before the face of God [Who] has visited His people (Lk. 7.16): the living fell [down] at His feet, and* worshipped (4 Ki. 4.37); the same Catholic confession made by the man cured by the Son of God of his in-born blindness at the pool of Siloe in yesterday’s Gospel, Jn. 9.1-38). The ‘Novus Ordo Church’ or the Neo-Catholic [Dis-]Order of Vatican II indeed makes the appearance of being vibrantly filled with a ‘fresh air’ but what a stark contrast in their Protestant manner of ‘Communion’ in the hand while standing: a concrete denial of the divine royalty of the Eucharistic King of kings and Lord of lords (Apoc. 19.16) – they have lost the central dogma upon which everything Catholic hinges! And that after more than fifty years of ‘rationalizable’ liturgical services!
—
* Where Sacred Writ distinguishes here divine worship from the act of kneeling down, the ‘Bible-only’ sectarians confuse divine worship with the human act of kneeling down which is abstractly indifferent.
—

Now, since the Holy Ghost Who is the “Giver of Life” is also honored, by a Votive Mass, on a Thursday, Liturgically devoted to the honor of our Eucharistic King of kings and Lord of lords, sitting on His earthly throne of our traditional Catholic high altar at the very center of His earthly court – our traditional Catholic sanctuary – Who Is the Life Himself and therefore source of life, we quote a noted Holy Ghost Father whose analysis of the critical signs of life of his time (1940s) could only be confirmed today by the tragedy to which they had already pointed to:

“ A considerable body of Christians, untrained in the Christian philosophy of life, are allowing themselves to absorb principles which undermine the construction of Christian thought. They do not realize how much more dangerous it is for Christianity to exist in an atmosphere of ‘Naturalism’ [the fundamental Masonic ‘dogma’ upon which all the 1789 revolutionary ‘liberalist’ principles current today within and outside the Church: as, ‘if one is gay – [g]od made him that way – who am I to judge?’] than to be exposed to positive persecution. In the old days of the Roman Empire those who enrolled themselves under the standard of Christ saw, with logical clearness, that they had perforce to cut themselves adrift from the social life of the world in which they lived – from its tastes, practices and amusements. The line of demarcation between pagan and Christian life was sharp, clearly defined and obvious. Modern [‘Christians’] have not been so favorably situated… The [institutional] framework of the Christian social organization [what the perverted SSPX Superior General now considers to be the real Catholic Church] has as yet survived. This organization is, to outward appearances, so solid and imposing that it is easy to be blind to the truth that soul has gradually gone out of it. Under the shelter and utilizing the resources of the organization of life created by Christianity, customs, ways of conduct, habits of thought, have crept in, more completely… at variance with the spirit of Christianity than even the ways and manners of pagan Rome.

This infiltration of post-Christian paganism [Neo-Paganism: subtle form of Satanism designed for the nominal Christians or post-Christians] has been…, at each stage, imperceptible. The Christian of today… without misgiving… follows the current of social life around him. His amusements, his pleasures, his pursuits, his games, his books, his papers, his social and political ideas are of much the same kind as those of the people with whom he mingles, and who may not have a vestige of a Christian principle left in their minds. He differs merely from them in that he holds to certain definite religious truths [as heretics do] and clings to certain definite religious practice [‘devotional’ without being necessary devout]. But apart from this there is not any striking contrast in the outward conduct of life between Christian and non-Christian in what is called the ‘civilized world’. Catholics are amused by, and interested in, the very same things that appeal to those who have abandoned all belief in God. The result is a growing divorce between religion and life in the soul of the individual Christian. Little by little his Faith ceases to exercise a determining effect on the bulk of the ideas, judgments and decisions that have relation to what he regards as his purely ‘secular’ life [the Masonic 1789 revolutionary “right of man” of “separation of the Church and the State” in its microcosm]. His physiognomy as a social being no longer bears trace of the formative effect of the beliefs he professes. And his Faith rapidly becomes… not something which is looked to as a source of life that is real.

…. One cannot be a true Christian and live as the bulk of men in civilized society are living. It is clearly seen that ‘life’ is not to be found along those ways by which the vast majority of men are hurrying to disillusionment and despair.” (Rev. E. Leen, The Holy Ghost and His Work in Our Souls, pp.7-8,9).

Therefore, that we find our life outside the post-Vatican II Rome of “diabolical disorientation” – speaking, seeing, and operating as the man of the Masonic Lodge can not be otherwise (until the Consecration of Russia to the Immaculate Heart by the Summus Pontifex and the bishops in union with him) than the reverberation of the beating of the Heart of the Great Sign in heaven sounding the thoughts of the Eucharistic Heart of our royal King of kings and Lord of lords (repudiated by the Neo-Catholic ‘ecumenism’ and by the rites and ceremonies of the Neo-Catholic ‘liturgy’ received from the hands of a Freemason and his Protestant collaborators): to deliver their souls from death, and feed them in famine (from the Introit of yesterday’s conventual votive Mass of the Sacred Heart)… flee to the mountains (Ps. 32.19; Mt. 24.15 – flee to the mountains, see “Catholic Resistance, Not Disobedience”).

The Teresian Order of Our Lady of Mt. Carmel - the (traditional) Discalced Carmelites of Catholic Resistance who adhere to the true God Whom generations of holy Catholics throughout the ages past have known, loved, served, and worshipped only in the Tridentine Latin Mass - "the NORM [of the Roman Rite] IN PERPETUITY" (Pope St. Pius V, "Quo Primum") and upon which is built the Traditional Catholic Order constituted by God and ruled by the Sovereign Roman Pontiff "for obedience to the Faith" (Rom. 1.5). On our position, see our blogposts "Our 'Great Reversal'" and "The Ultimate Delusion of Vatican II 'Catholicism'." Home of the original online "Catholic Resistance."
View all posts by Ignis Dei →
This entry was posted in Christian Life, Sacred Scriptures, Traditional Roman Catholic Order, Vatican II mock-Catholic Religion and tagged Apocalypse, Catholic sanctuary, Immaculate Heart, Incarnation, Neo-Catholicism, Pope Paul VI, the Blessed Virgin Mary, the Holy Ghost, Vatican II. Bookmark the permalink.