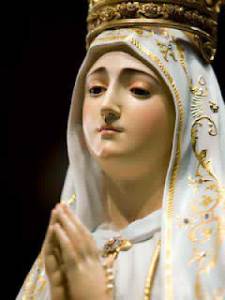 Embrace discipline, lest… you perish from the just way (Ps. 2.12) The Great Sign in heaven has long since thundered the Apocalyptic alarm: “Penance, penance, penance!” No way then could the true Catholic Church abolish from her calendar the Apostolic discpline of abstinence from meat every Friday of the year (except when Christmas falls on this day) – whereas, the pseudo-Church in the mocking presumption of its “Vatican II ‘spirit'” did, maintaining only Good Friday as the day of abstinence (and, fasting – the 40-day discipline, excepting Sundays and Feasts, of taking only one full-meal and two half-meals a day).

But Christian penance is much more than about our attachment to food, earthly goods and their pleasures. It consists first of sacrificing what estranged our primary contact point with God: every half-truth the devil continuously bombards into our mind – a half-truth, for the devil is not a dimwit as to try deceive with an outright lie since deception is his game. And this sacrifice is the love of the truth – not just knowledge and material possession of it after the manner of our enemies (the Synagogue of Satan with its dum[b]ies, including the Neo-Catholic ‘official’ hierarchy, and the new ‘Neo-Catholic DisOrder’ integrist of the Fellayite regime of the mainstream liberal-SSPX) who even knew Catholic Theology through and through but for its subtle undermining (cf., the so-called “New ‘Catholic Theology’“; whereas, Sedevacantism smacks of a dire want of Catholic Theology – its sheer contradiction of the dogmatic weight of the unanimous teaching of the Fathers with its mere speculative opinion and its ‘exegetical’ fabrication to buttress its pretended refutation of ‘recognize and resist’). This is the divine shield with which we could repel the impure liberalist spirit in all his many-faceted assaults. His truth shall compass thee with a shield: thou shalt not be afraid of the terror of the night: of the arrow that flieth in the day, of the business that that walks about in the dark, of invasion, or of the noonday devil (from the Tract of today’s Mass, Ps. 90.5-6).

I say to you… unless you shall do penance, you shall all likewise perish (Lk. 13.3).

The Teresian Order of Our Lady of Mt. Carmel - the (traditional) Discalced Carmelites of Catholic Resistance who adhere to the true God Whom generations of holy Catholics throughout the ages past have known, loved, served, and worshipped only in the Tridentine Latin Mass - "the NORM [of the Roman Rite] IN PERPETUITY" (Pope St. Pius V, "Quo Primum") and upon which is built the Traditional Catholic Order constituted by God and ruled by the Sovereign Roman Pontiff "for obedience to the Faith" (Rom. 1.5). On our position, see our blogposts "Our 'Great Reversal'" and "The Ultimate Delusion of Vatican II 'Catholicism'." Home of the original online "Catholic Resistance."
View all posts by Ignis Dei →
This entry was posted in Christian Life, Sacred Scriptures and tagged devil, Neo-Catholicism, penance, Sedevacantism, SSPX, truth, Vatican II. Bookmark the permalink.